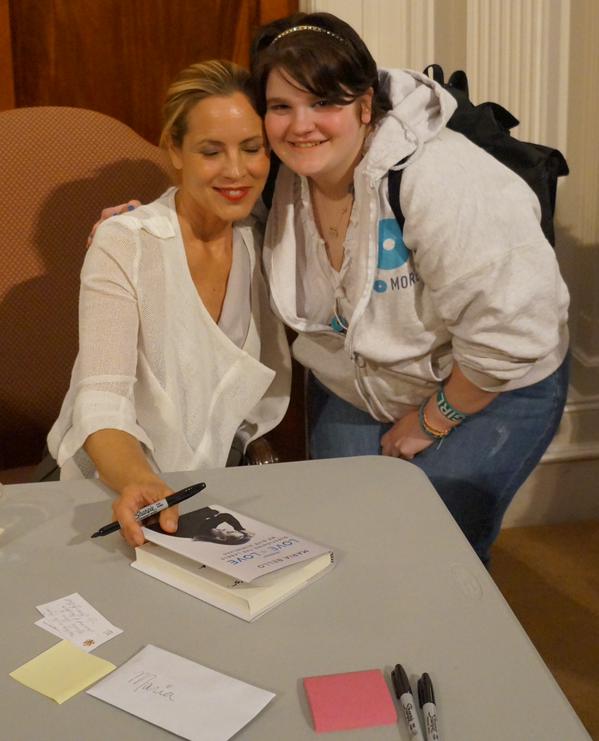 My experience started on Tuesday, April 28. The day Maria’s first book, Whatever… Love is Love was released. It was also the day of her first stop on her book tour in New York. I really wanted to go, but I had two problems, I had work, and I didn’t have the money to get there. I wound up calling out of work anyway because of my blood pressure, which I got under control, but I still didn’t have the money to get into the city. I was kind of bummed all day. And then, I was tweeting Maria (as I had been a lot over the past couple weeks) when a producer from HuffPost Live tweeted me. Maria was going to be on the next day, and they wanted some fans of Maria Bello to join via webcam. I jumped at the chance, not thinking I would have the opportunity to meet her or speak to her any other way.

Wednesday came, and I was anxious, in a good way, all day. I managed to fangirl on camera in front of the host and Maria. She chuckled a bit, so I feel better about that. This was before my book arrived, so I hadn’t read it, but when I did, there were so many more things that I wanted to ask her, to tell her. The biggest one being about something that effects me on a daily basis, as much as I wish it didn’t. “How do you get over that ‘not good enough’ feeling?” But I’m getting ahead of myself. After talking to Maria on Wednesday, I looked at her other book tour dates, there were some in the Philadelphia area, but I was working both days, so I couldn’t go to them. But there was one in DC. So I looked up train tickets and they were insanely expensive. So my friends and I decided, if we could find someone to watch their 18 month old baby, we would drive down for the event, and drive back.

My sister and her friend said they would watch the baby for us as we went down. I finished the book in a matter of hours, and as I was reading, I noticed a recurring theme. Not feeling good enough. I’d taken a creative writing class last year and I wrote something about being good enough. I knew I had to give this piece to her. Something just told me to. So I printed it out and put it in an envelope with a letter about what this piece was and why I was giving it to her.

Monday, we hit the road for DC. We made it in time (thankfully! The traffic was insane) and another friend had saved us seats. They told us we could get up and ask her questions, and at that point, I felt the tears. There was no doubt that I was going to wind up crying because the book taught me so much about myself, and that I don’t need to accept any label that doesn’t empower me and make me feel good about myself. Before I got up to ask my question I threw on the sweatshirt I had in my bag, my No More sweatshirt, because I was afraid my shirt was too see through. So I got up when they called for questions, and I was third in line. I waited at the microphone and Dan Jones of the NYT, who was moderating nodded to me to give me the floor. I started to speak, but Maria stopped me, with wide eyes.

“Wait, are you wearing No More!?” I said I was and she responded with something along the lines of “Yeah! Go Mariska Hargitay! Joyful Heart!” (There was clapping, and I’m just slightly hard of hearing, so I didn’t hear her exact words). I smiled and took a breath, I already felt more comfortable talking to her.

And so I started again. “Hi Maria, my question for you is, you talk in your book about not feeling good enough a few times, how do you overcome that feeling? I know it’s something I struggle with…. a lot.”

She smiled and nodded and she said. “I just look at the people I have in my life, my friends and my family and I think I must be okay, why would these people want to stick around if I was an asshole? And you, you’re so awesome, supporting an organization like No More to end domestic violence and sexual assault. You’re beautiful, I’d want to be your friend!” and the tears started.

I smiled and laughed a little and wiped my eyes and said, “You know, I’m the one who sent you the t-shirt on twitter!” because the week before I sent her a picture of a shirt I designed that says “I AM A WHATEVER” on it. She loved it!

Maria’s face lit up and she said “Shut up! REALLY!?”

“Yeah! I haven’t had it printed up yet, but I’m the one that designed it.”

I thanked her and on my way back to my seat another audience member stopped me and asked if she could see what the shirt looked like, I told her I have a picture on my phone I would show her after the book signing.

I went back to my seat and I just cried.

After was the book signing, my friends and I got in the back of the line and we went up with our books (and me with my envelope) and we waited our turn. When we got to the stage I walked up first, still on a high from her answer to my question and not thinking clearly, when a woman asked if I wanted a picture, we used my friend’s camera, so we gave her that, someone else asked “signature only?” I didn’t understand what she was asking so I said, “Uh, yeah”, and that’s what the woman told Maria.

Maria said “Oh no! I want to personalize it!” and smiled up at me.

I smiled and told her my name was Nicole, and that I was on HuffPost Live with her.

She looked up at me again and said “Oh yeah! You were!”

At that point I put the envelope on the table and said “I just want to give you this before I totally forget and kick myself.”

Once we were done she slid the envelope closer to her, and I think she put it in her bag.

We walked down the stairs and talked with her mother, Kathy, for a little bit, even got a group photo with her. I asked if she wanted to see the shirt I sent to Maria on twitter and she said yes. So I showed her and she responded with “Oh yes! Maria showed that to me. It’s wonderful!”

After talking with Mama Bello, as I’ve come to call her, we walked out of the venue and on the steps was the woman who earlier wanted to see the t-shirt. So I asked if she wanted to see it and she said yes. She asked if she could buy it anywhere and I told her I was still waiting on Maria’s approval for it, so she gave me her business card and told me to email her when she could buy it and where.

After that a college professor came up to me and asked about No More, and what it was, but just as quickly as he came he was gone, and spoke to my friends who were on the sidewalk. Then I saw Maria ready to walk out. I moved down the steps a little when she came out and she smiled at me. I asked if I could ask her another question and she smiled and said of course, she told the woman who was next to her that I was on HuffPost Live with her and she said “Oh yeah!” I then asked if she was Maria’s assistant and she said no.

“She’s my publicist.” Maria said with a smile.

I told them I was asking because Maria’s assistant follows me on Twitter. They both said “Oh, Michelle?”

“I actually don’t know her name, it just says Maria Bello Assistant as her display name!”

Her publicist remembered that I’d wanted to ask a question and that got me back to what I wanted to ask. “Oh, right!” I said “You said, when you saw the shirt you were going to talk to your designer, and I was just wondering if you’d done that yet, I have a few people who are interested in buying the shirt.”

“I’ll have Michelle reach out to you so you two can organize.”

I thanked her and she smiled and looked at me. “You’re so cute! I’m going to follow you on Twitter!”

I told her that I would then promptly cry. She smiled and said to go ahead and cry, there was nothing wrong with that.

As we were getting ready to leave I rested my hand on her shoulder and I smiled at her and told her I was so glad it snowed. Even if she would have chickened out that night, I’m glad it snowed, I’m glad she got the sign she was looking for that someone heard her.

As we were walking back to our car, I came to realize that Maria and her mother were my snowfall that night. They were my reminder that I matter to people. I’d felt so empty for the past month or so and Maria and her mother filled that emptiness. There’s no way to properly thank them for how much their kindness has helped me. I’ve been crying for the better part of the week at how absolutely incredible that night was.

Fast forward to May 7, three days after I met Maria, when she did her AMA (Ask Me Anything) on Reddit. I asked if she had the chance to read what was in the envelope I gave her on Monday night, and this was her response:

Maria Bello is an inspiring woman, an angel, and my Snowflake. Maria, if you’ve read this… Thank you for everything, you don’t know how much your kindness means to me.