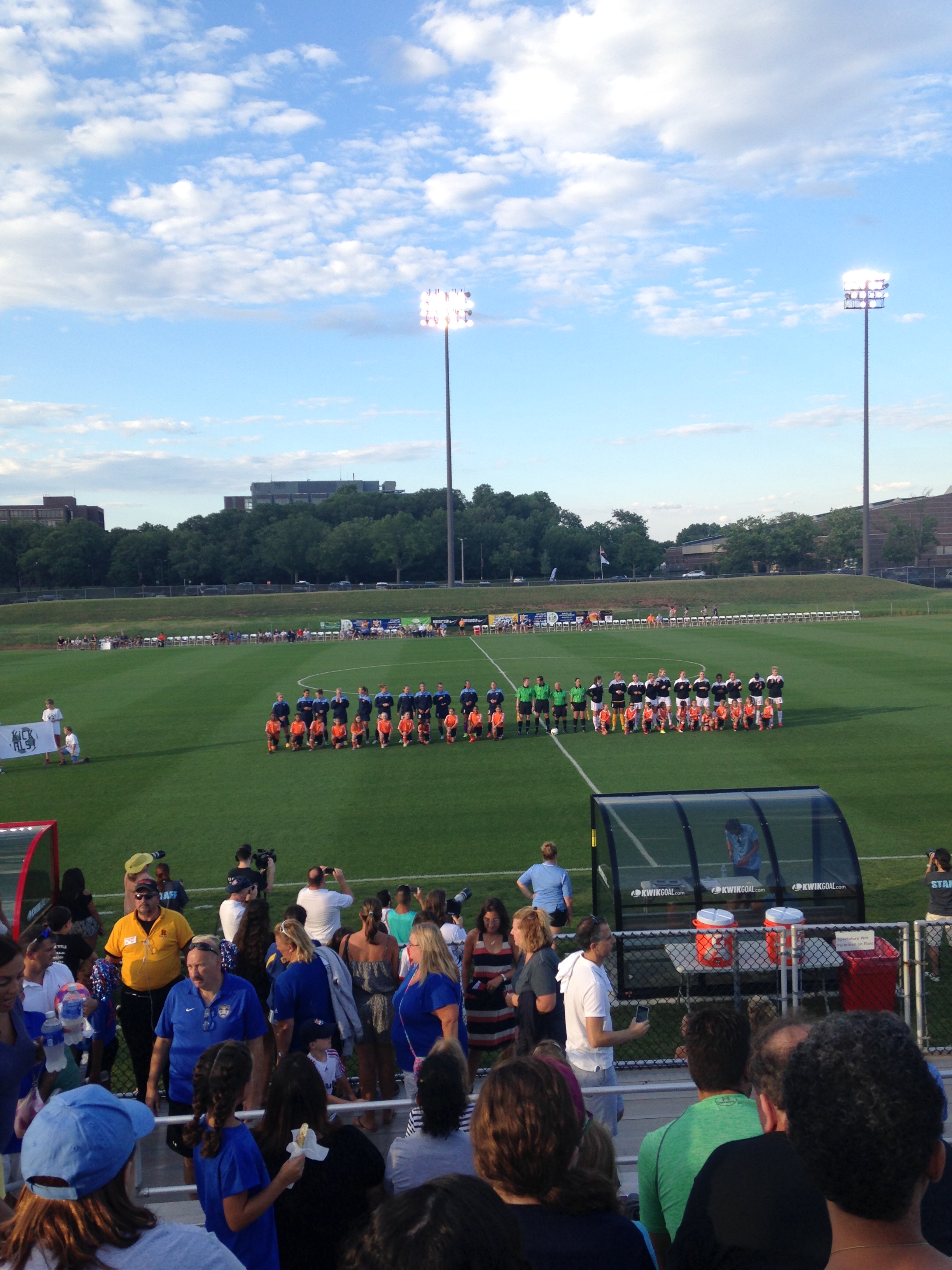 First, Let me say I am so sorry its been so long since I’ve updated this, Life happened (AND I’m moving!), but I have a free minute and after the soccer game I went to last night, I have something really exciting to share!

Okay, so my love of the game of soccer really started during the WWC Finals, watching USA play Japan…I was glued to the screen. I couldn’t tear my eyes away. At the end of that game, I was hooked.

But my love for a few of the players of soccer started in November of 2013, with Jillian Loyden who was the keeper on Sky Blue FC until October of 2014 when she retired from professional soccer. She started the Jillian Loyden Foundation and I was invited to their first gala (another post to follow on the JLF Galas). I met Jill there, and she truly has a kind heart and a gentle spirit. I went back to the second gala in November of 2014, where I met Christie Rampone (CAPTAIN AMERICA), Rachel Breton, and Yael Averbuch, all of whom showed me nothing but kindness (Christie even hugged me but more on that in the JLF blog post to come!).

After the World Cup, my grandma gave me the money to buy myself a ticket to the Sky Blue game where Christie and Kelley O’Hara would be welcomed home, which happened to be on my birthday! So, I made myself a shirt that says “CAPTAIN AMERICA” on the front, “RAMPONE” and her number “3” on the back with three stars on the sleeve and I hiked up to Piscataway. I got there JUST in time for the game to start, and wound up missing a good chunk of the game, including Sam Kerr’s goal, our only goal that game and Sam’s first goal for Sky Blue, because I was in line for concessions (Happened to run into one of the Staff Writers for SVU at the game. I can’t escape this show!). I’d also gotten a wrist band to meet 2 of the players that night, and when I got in line for that, I missed more of the game, and finally I realized “I’m going to miss Christie seeing this shirt, I need to get back to the railing!” So I went back to the stands and STILL missed Christie because it was so packed!

But, I saw Rachel again and it was so awesome. She remembered me and asked if it was my first game or if I managed to get to another one and she missed me. I told her it was and she said that was awesome and it was good to see me again. I met a few of the other girls and I left feeling over the moon (Even if I missed about half the game and wanted to verbally pummel the people behind me for their comments about MY team. Yeah, not even a whole game and they were already my team. Back up.), and it was absolutely an amazing birthday!

So, August 1st, I went to another game. I brought my cousin along with me. It was the Kick ALS game, so we all got red cards upon entering and during the last minute of half time, we held them up, symbolically “giving ALS the red card”. Christie AND Kelley played in this game, AND Christie capped. After they announced her and the screams died down a bit I yelled as loud as I could, “WE LOVE YOU CAP!” They were playing Western New York Flash, and the Flash scored a point in the first half.

In the fourth minute, Grubka got knocked in the face by another players head, and was taken out for a short period of time to get her bloody nose under control, and then she ran back onto the field later on in the half with tissue in her nose and played. Both me, and my cousin were in awe of her (and who says women don’t play hard? #LikeAGirl) NWSL Player of the Week? Me thinks so!

In the second half, Kelley O’Hara scored us a point  and I have never shouted so loud in my life! I’m honestly shocked that I have a voice today. My sign (WE WILL NOT QUIT! WE WILL NOT GIVE UP! WE WILL NOT BE BEAT WITHOUT DOING OUR BEST) was proudly raised above my head as the team shared a hug on the field.

Let me tell you, EVERY TIME Christie put a kick up in the air (I don’t know proper soccer terminology for that yet, I’m still a new fan. And I’m proud to be a new fan. I’M LEARNING) I looked at my cousin and said “That kick, oh that kick. The beauty.” Seriously, her kicks are gorgeous.

After we went up to the railing and did our darndest to get Christie to come over to see my shirt (to no avail, next time!) we did get Brittany Cameron, Taylor Lytle, Rachel Breton, and Theresa Deiderich all to sign our new Sky Blue pride (From Pride Night in June!) shirts. As much as we tried calling Christie and Kelley over, we know for next time we have to go over to the corner, that’s where they go to do autographs, but now we know for next time.

Overall, (even though we lost, our girls left it all on the field, and I couldn’t be prouder to bleed orange & blue!) we had an awesome time, and the entire team earned this:

And here are some more pictures of the game and players. Excuse the horrid quality. I took them on my iPhone from the stands.

And, for more soccer stuff, click HERE for my soccer Tumblr