"Why are You Laughing At Ellen Burstyn?" and Other Amazing Bits from A Conversation With Mariska Hargitay and the Hilarity That Ensued Before & After 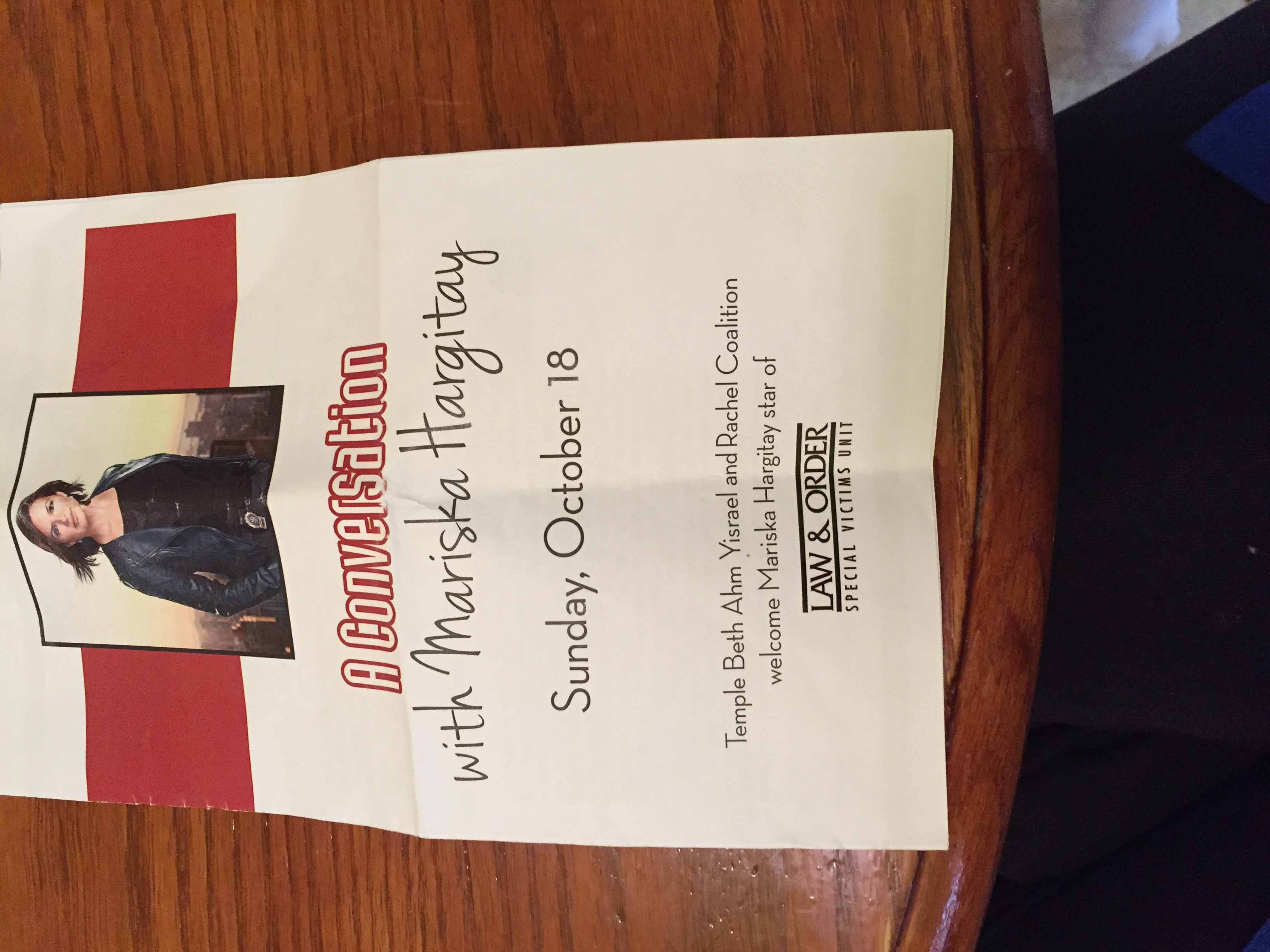 That’s a long title. But it’s fitting. Sunday night was an incredible night, I may not have gotten to speak to or hug Mariska, but it’s okay, because I was in her presence, and if you have yet to have that experience, Mariska Hargitay’s presence brings a level of peace I’ve never experienced in any church I have ever been in, and I’ve been in quite a few. Another piece of evidence in my case that Mariska Hargitay is an angel placed on this earth. Okay, but really she is. Maybe I’m crazy but I swear she and Maile have halos.

Anyway, back to the event. It was marketed as a conversation about Domestic Violence, and many people said that those fangirls who were going weren’t going for the right reasons. Let me clear something up, it was no more a conversation on Domestic Violence than Inside the Actor’s Studio was. Yes, they spoke about JHF, and End the Backlog, but sexual assault was discussed more than Domestic Violence. At its core, this event was a fundraiser for a Domestic Violence organization, The Rachel Coalition. 700 people were in attendance, and it was an incredible night!

Michael Smith (Yes, you know the name, he directed Surrender Benson) was asking her questions about her life, her family, why she decided to become an actor, her acting career, and what she wanted to be when she was a kid (a French Diplomat, because it sounded tres chic). She sang the Hungarian song (WHICH I MISSED, BLADDER BE DAMNED) and Maile even hopper up on stage to speak (still mad at my bladder for that). What we learned, actually, what most of us already knew, is that Mariska Magdolna Hargitay is adorable and somehow manages to be human and angelic all at the same time.

Michel Smith asked her about some of the guest stars on SVU, and he named a few and then said “What’s her name… ELLEN BURSTYN!”
*laughter from the audience*
Mariska turned to us and asked “Why are you laughing at Ellen Burstyn?” (Hence the title of this blog). Michael assured her we were laughing at him, not Ellen.

10? You’re an 11! (Still refuse to believe there was a time where Mariska was awkward or ugly. Nope. You will not convince me. Mariska- PICS OR IT DIDNT HAPPEN)

Cynthia Hooper will always be bae, second only to Olivia Benson (Rules, there are rules). And THANK GOD FOR BBBBBBBBBBBBBB B Class movies (Like Ghoulies, Jocks, & Welcome to 18). She doesn’t let the kids watch screaming, even if it’s her blood curdling screams being eaten alive… Okay on second thought that’s a good thing. It’s traumatic for me and she’s not my mom.

Before she walked into the room, I was a mess. I was sure I was going to throw up, my stomach was torn apart and I was shaking. The second she walked in and looked at us and said hi, and I raised my arm high and waved and said in a high pitched voice “Hi Mariska!” And fell into my friend Gina I instantly stopped shaking, my stomach felt better, and that feeling of peace washed over me. As she was leaving that night, I got as close as I could and said “I love you Mariska!” I was going to say something to Maile, but words weren’t forming in my brain and nothing was coming out of my mouth. I felt bad, still do.

Before we got there, we had to move the car to the GA lot, so it didn’t get towed, and took a shuttle back to the temple. As I was getting off the shuttle I fell. Landed on my butt. Pretty sure the woman behind me said “Oy Vey!” I was fine, nothing hurt, nothing twisted, I’ve fallen and gotten hurt worse. I saw some old friends and met some new ones (I thought Joy was Maile when I first saw her!) I got to see one of my best friends, Chana again, and since she lives so far away, we don’t see each other as often as we’d like. And Safia… Safia rapped for Mariska. WHAT!? Yeah, and Mariska loved it. I MET DAFFODIL! AKA Lucy, and it was awesome, especially since she’s kind of a legend. I got to meet Rae, FINALLY, who is awesome and is like Jenna Marbles but better. And Chantel, who I actually recognized this time around. We went to a diner after with Rollins, Deidre, & Gina and we shut the place down and stood outside and laughed for a good half hour after.

I got to see Jamie & meet Linda… One of them, and Jackie (which I probably spelled wrong, if I did I apologize!) and we figured out not only were we on the DCP at the same time… We worked in the same park! It’s a small world (fun fact: that ride gives me nightmares) after all!

I don’t even know what else to say, but overall, Sunday night was one of the best nights of my life, and I wouldn’t trade it for anything.