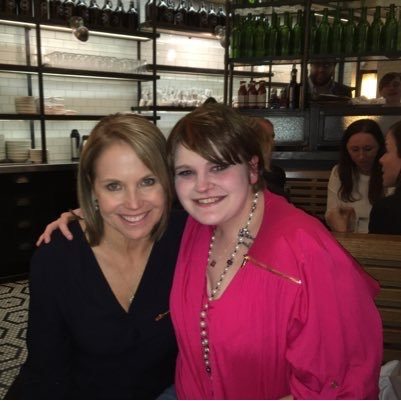 Before I get too far into this blog, I want to apologize for not being on here as often as I’d like, the past few months and even more so the past few weeks have been hectic and stressful. I’m currently on disability, and on March 29 I was diagnosed with Multiple Sclerosis. Monday, Tuesday, Wednesday, and Friday were spent in the hospital, either for steroid infusions to help me out of this flare, or for tests.

But Thursday was magic. Pure magic. I got to spend the one day I wasn’t in the hospital in the greatest city in the world, New York, NY. Manhattan. The Big Apple. There was a plan, a plan I’d been sworn to secrecy about, a dream of mine was finally coming true. I was going to meet Katie Couric, and I’d never been mode excited or more nervous in my entire life. In fact, after she agreed to meet me, my mind was rushing with thoughts along the lines of “I’m going to fall into her, knock her over and give her a concussion and be blackballed from journalism” but those worries eventually subsided.

We’d worked out a meeting for the morning, but my grandma and I hit horrible traffic and we arrived to NY with about 5 minutes to spare, and getting to the restaurant just wasn’t happening that quick. I stood in the middle of Port Authority just sobbing, convinced I’d missed my shot to meet her, and that she would hate me for keeping her waiting for so long. My grandma took my phone and called her assistant whom we’d been keeping in the loop. My grandma begged her to try to get it rescheduled, I really needed it after being in and out of the hospital all week. Shortly after we got a text, Katie was willing to reschedule, same place, that afternoon. We grabbed some breakfast, picked up some hand wipes since I needed to hold onto railings walking up stairs with my cane.

We headed to the restaurant 45 minutes before we needed to be there. We were not going to miss her again! So we waited while Katie was finishing up a shoot (which will be up later in the week on Yahoo! News!), we went in and mentioned we were there, and took a seat at the booth. My eyes were as glued as they could be (I’m short, it was crowded.) to the door. My grandma actually wound up seeing her before I did, and when I saw her, it felt like I was in a dream. I stood up and hugged her and apologized for the morning. She said it was fine, and hoped I hadn’t been too stressed about it.

We sat down, and we just talked, I told her about my MS and she encouraged me not to give up, she made sure I was comfortable with my doctor and the hospital, and told me if there was anything she could do to let her know. She wanted to know more about me, what I was studying in school, where I was going to school, she asked if I liked to write.

Something else I noticed was that she was very motherly towards me. I don’t know if that’s just how she is, or I just felt that way because she acted in a way I always imagined a mother would, a way I wished my own mother had. She was interested in what I had to say.

There’s no feeling quite like having someone you look up to looking at you, taking an interest in you, and really caring. I felt like so much more than just her fan. I felt like her friend.

Before she left we took pictures, some of her, my grandma and me, then just the two of us. When it was she and I she sat next to me on the booth, and she wrapped her arm around me and held me tight. I felt safe. After that, she had to head out, she hugged me again, tight. It was just what the doctor ordered.

I lived in Disney World for 2 months, and it’s magical there, but for me, Manhattan always has been and alway will be magical. It’s the city of dreams, or at least mine. So many dreams have come true for me there, and many more will too.

Look around, look around at how lucky we are to be alive right now! History is happening in New York and we just happen to be in the greatest city in the world!
-Lyrics by Lin-Manuel Miranda
From Hamilton, The Schuyler Sisters