An Open Letter to Hope Solo 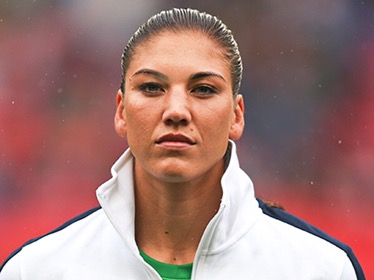 I know you won’t see this. I’m a nobody to you, especially because I don’t particularly like you.

This isn’t about anything in the past, it would be far too long if that were the case. Trust me. I’m here to focus on the comments you made after the USWNT lost to the SWEWNT.

That “They’re a bunch of cowards and the best team didn’t win today.”

This, you don’t get to deny. This, many people heard you and you don’t get to play the victim here.
You, regardless of how any of us feel about it, regardless of if you like it or not, are a role model to young soccer players. Boys and girls. Because you’re the best. Just last year you won the golden glove, signifying your position as the best goal keeper in the world in the game of women’s soccer.

I, as a coach, will now have to make sure my players know that calling your opponents cowards after you lose to them isn’t acceptable in any fashion, and that they don’t get praise of saying it. For being “just like Hope.”

The behavior you exhibited today is not that of a world class athlete, of a role model. What you exhibited today is nothing more than bullying, nothing more than hurting someone else because you didn’t get your way. You acted no differently than the head coach of Cameroon in 2012 when he said Brazil’s WNT, specifically, Marta, was “too fat” to win gold.

I saw 2 things today. The first, a sore loser. Sweden pulled out all the stops, and played a great game, and followed their plan, a plan your team used to follow, but you also put down your former head coach who gave you plans like that. The other, I saw a petulant child who didn’t get her way.

I have a nephew, he’s almost three, and even though he doesn’t like getting his way, the most he does is cry. He doesn’t insult the people he’s mad at. He doesn’t try to make someone else feel bad because he feels bad.

You are a professional athlete. You’re a household name. Words matter. We’ve heard that a lot this week, but it’s true. Future WOSO stars, just like you, are watching you right now, are listening to your words right now. And it influences them. Show a level of respect for your competitors, in the game, after the game. For your fans, no you don’t owe them a thing, but when you turn your back on little girls screaming your name for a simple autograph, that stays with them.

Respect the game, and the future of the game enough to be better. Not just a better athlete, but a better person.

Be a better person Hope. I know that deep down, somewhere, behind all the hurt you must feel to do any of the number of things you’ve done that are inexcusable, there’s a woman in there who wants to inspire a generation, with not only her athleticism, but with her heart, and her kindness.

Be well, Hope. Let the positive in you shine for our girls.